Everything is impermanent. Everything is subject to change. Everything. That’s a lesson I took away from Buddhism, and I applied the idea to everything. In the end even to the afterlife. If if there is a personal soul that survives the body, it too is impermanent, like the body, and will one day perish. Meaning that I’d still have to come to terms with mortality. “I”, as body or soul, will cease to exist. Whatever is left is food for worms (perhaps there are spirit-worms that will help my soul decompose?).

But since ideas of the afterlife are varied, abundant and remain a subject of belief and speculation, its more fruitful and relevant to deal with the here-and-now-life, the thing we can know immediately about.

Perspectives and priorities change; I’m not sure that I will continue existing after I die, but I’m extremely sure that life in the universe will continue long after I’ve gone, and this continuity of life deserves my consideration more than personal survival after bodily existence. 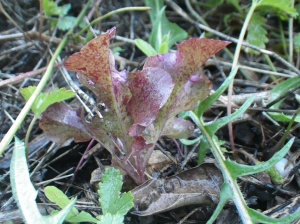 How did it get there? I don’t remember sowing seeds THERE!

My experiment with the semi-wild veg patch hasn’t worked out as I’d hoped, but it has had some interesting results. It’s always been experimental, and I’ve been open to any result, because any result can teach me about how to develop the system in this location with its climate and soil.

I learnt the idea from a book written by a Japanese farmer (Masanobu Fukuoka’s The One-straw Revolution), which could give ideas about how to experiment, but couldn’t tell me how it worked because, well, different climate, soil, weather patterns et al mean that what works there won’t work here exactly the same way. This meant I had to start from scratch and experiment with what I had.

In the end out of all the different seeds I sowed aming the grass, not much grew. I had beans, peas, rocket, radish, spinach and garlic, including two courgette plants. Not all of these produced anything significant, so I left them to self-seed. One very surprising part were the lettuces: none of them grew up where I planted them, appearing outside the veg patch or amongst the radishes and rocket. Enough for a couple of salads when they’re  big enough.

In the future I can concentrate on what worked this year and improve the conditions, like not putting so much mulch on top or sowing at more suitable times of year (I was very enthusiastic at the beginning, throwing seeds down earlier than I should). Alongside this I can continue experimenting sowing new things. And who knows, maybe some of the seeds I’ve planted are just laying dormant, waiting for the right moment to surprise me!

I’ve spent a few years training my dogs and applying what I’ve learnt from the Cesar Millan aka Dog Whisperer, and I’ve realised just how much I’ve been training myself. Dog training isn’t just a way to “program” your dogs to get them to behave how you want; dogs reflect the energy of their owners, so if you want them to behave in a certain way you have to modify your own energy (i.e. reactions and instincts) so they have something different to reflect off of. And it has nothing to with physical superiority, it’s psychological. As you can see with the elephant tamers in India, giant animals that could easily overwhelm the humans in charge of them, but that actually cooperate. A few years ago I learn to ride horses the “horse whispering” way, earning their trust and cooperation rather than dominating them and controling them. Their own reactions reflecting the reactions of their rider. This requires discipline and consistency and an insight into how you react in certain situations and how you can train your reactions into other, more constructive directions.

This requires discipline and consistency, the same discipline and consistency for training your dogs, i.e. training your own instincts. There is detailed etiquette involved which focuses the mind to the task at hand; there are behaviours my dogs have to observe, which in turn obliges me to behave in a certain way. And we all get what we want and need.

But this discipline or aikido and dog/horse/elephant whispering is not aimed towards mechanical control but an energetic and harmonious cooperation. We have an animal within us that needs expression and exercise, and is often reflected in the relationships we have with animals around us, and they can help us in this relationship, to establish an inner harmony.